May 20, 2014 · by davidaleksandersen · in Inspiration, Music, presentations, spotify playlist · Leave a comment 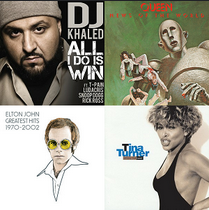 ivational music (a kind of guilty pleasure…) and I have put together a colleciton of my favourite music for use in presentations, kick-offs, or any other events where you would like to boost the audience, push their confidence or just get them going!

Elton John – I’m Still Standing
I’m Still Standing is the second song of side one (for those who knows what vinyl is) from the 1983 album, Too Low for Zero by our hero musician Elton John. Wikipedia can tell us that John uses the song as an anthem at his live performances. And it is. It is a perfect song for boosting energy and life to an audience.

The Go! Team – Bust-Out Brigade
One of my favourite bands, The Go! Team blends a perfect mix of indie rock and garage rock with a tad blaxploitation and Bollywood soundtracks, double Dutch chants whilst tying in old school hip hop and distorted guitars. How about that for awesome! If you do not want to raise your hands, jump and wobble to this – you’re completely deaf.

Queens of the Stone Age – Go With the Flow
Stoner rock for the masses! QOTSA has never compromised on anything. And neither should you if you need an anthem to make people exaggerated and willing to go the extra mile! Songs for the Deaf (their third album) was a critical and commercial success – fully understandable.

You can subscribe to my Spotify Playlist – Get Motivated – a playlist of motivational songs to get access to all of them – so have a few hundred other people done. For those of you who are a tad sharper than the rest… You will see a permanen link up to the right named “Motivational Music”.